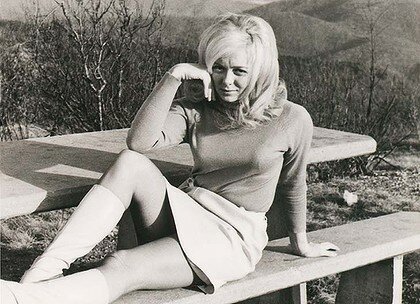 "Once upon a time there was a beautiful princess…" Thus starts Tabloid, a tale of love, kidnapping, scheming newspapers, silly disguises, an evil cult and magic underwear. It’s also a documentary.

Joyce McKinney is a strange but bubbly sixty-something with an outrageous past. A former Wyoming beauty queen, she claims to have been a wholesome young lady. When she moved to Utah, she fell head-over-heels for Kirk, a feeling that (we are told by Joyce) was reciprocated. But there’s a catch: Kirk and his family are members of The Church of Jesus Christ of Latter Day Saints. Mormons.

Add your comment
11-11-11: The Movie (or How to Have a Complete Mental Breakdown)
Written by Ivan Radford

Take the number 11. Now turn it upside down. Now turn it the right way up again. What number do you have? That's right: 11. Terrifying, isn't it?


Just in case you're not scared enough by that (and you clearly should be), the film's released two different posters, one at slightly more of an angle than the other one.


Yes, the film is from the creator of Saw. And yes, it sounds like a total load of number wang. But once you start thinking about it, it actually makes a lot of sense...

"When two objects collide... there is always damage..."


So speaks Jared Harris in the Sherlock Holmes 2 "special content" trailer. What's special about it? Mostly the vox pops they've dumped in the middle of the other footage. But if the other footage includes Lane Pryce from Mad Men twirling his moustache, I'm more than happy to watch it.


Guy Ritchie's Sherlock sequel may not look like a classic (indeed, neither was the fun first one) but Moriarty could be brilliant. Did I mention it was Lane Pryce from Mad Men?

Sherlock Holmes: A Game of Shadows is out on Friday 16th December.

"You should treat him like a brother." "He's no brother of mine. He's a nigger." That's the sound of a fresh voice taking on Wuthering Heights. The shouts of swearing. The noise of wind. Andrea Arnold's natural adaptation of Emily Bronte's familiar novel sounds completely, breathtakingly modern.

I don't know about you, but my 17th birthday was definitely a lot like this:

Project X is out in March next year. Ignore the fact that it's produced by Todd Phillips - it's directed and written by the guy who co-wrote Scott Pilgrim vs the World.

Here are some exciting facts about each:

Ola Rapace is Swedish. This makes him 700% more awesome.

Ola Rapace was married to Noomi Rapace. This also makes him 700% even more awesome.

Helen McCrory played a vampire in Dr Who. But it turned out she was actually a big fish.

Helen McCrory played Cherie Blair in The Queen and Narcissa Malfoy in Harry Potter. No-one can tell the difference.

Old Rapace is an anagram of A Coral Ape.

Helen McCrory is an anagram of Lyncher Comer.

Helen McCrory is married to Damian Lewis. This makes her 700% even more awesome.


Add your comment
Review: The Awakening
Written by Ivan Radford

We all thought the same thing when we saw Pride and Prejudice: Pemberley is terrifying. Well, now we've been proved right, because Nick Murphy's made a horror movie there. And it's even scarier than Mr. Darcy's manners.


Florence Cathcart (Hall) is a woman who believes in science over spirits. She runs around period England disproving paranormal acitivity, using nothing more than a bag of mechanical contraptions and her brain. She's like the new Jonathan Creek. A ghostbuster, 1920s style.

I spent a lot of time geeking out over the fourth video blog from The Hobbit. Peter Jackson. 48fps. And Red cameras named after The Beatles. It's almost enough to get you excited about 3D.

The concept art actually looks great through my crappy red/blue glasses. Can you imagine Figwit in 3D?


Voicing Jonathan Harker and the Count himself, it's a veritable fest of Fassbending, as he lisps and croaks his way through 10 episodes with a wonderfully dodgy accent.


"When I am done with him... you shall kiss him at your will..." he purrs, sounding like the sexiest non-Transylvanian vampire ever.


The series is still continuing, every night at 11.45 in 15 minute chunks. Which means that the first four parts (all broadcast on Halloween) are on iPlayer for another 4 days, while the rest are around for a week.


Click here. Listen. Now. Or read on for the first episode. Your ears will thank you in the morning. It's either that or you go and buy X-Men: First Class on DVD. Or do both.

Andrew Haigh’s sensitive romance sees two men meet in a nightclub and form a burgeoning bond that becomes intensely intimate over a period of 48 hours. Russell is a timid homosexual, who’s come out to his friends but doesn’t talk much about his love life. He’s the complete opposite to Glen, who not only shouts about naked men in leather boots in a pub, but then has a go at anyone who doesn’t like it. They’re two contrasting responses to society’s treatment of queers that mark out Haigh’s movie as both daringly different and instantly familiar.

After its wonderful re-release in cinemas last month, Spielberg's dino-tastic Jurassic Park trilogy came out on Blu-ray and DVD for the first time last week - but we were too busy running around at the London Film Festival 2011 to bring you this important Jurassic Park Survival Guide.


Just in case you end up on Isla Nublar or Isla Sorna in a real-life Jurassic Park scenario, here's how to survive a dinosaur attack:

For more infographicky goodness, take a look at some of our other How To guides, including How to Stop the End of the World, How to Break Out of Prison, How to Get Married, How to Survive an Alien Invasion - and a diagram of Christian Bale Punching People.

This morning, a James Bond Facebook page and a 007 Twitter account appeared in my inbox. Why? Because, of course, today is a big day for the James Bond franchise. Yes, it's 50 years ago today that Sean Connery was announced as the first actor to play James Bond in Dr. No.

But it was also the day that Bond 23's title was announced. As everyone expected, it's called Skyfall. A slight let-down, but it's not the end of the world. (Unless Chicken Licken is in it, in which case it definitely is.)


In between the endless (and equally dreadful) Skyfall jokes flying around on t'internet (I was still hoping it would be called 23nal Destination), the following details came out about Bond 23. It's directed by Sam Mendes (we already knew that), stars Daniel Craig in his last contractually-obliged Bond film (we knew that too), as well as Judi Dench as M, Javier Bardem as the bad guy, Naomie Harris as a field agent called Eve and Bérénice Marlohe as a Bond girl. Other cast members include Ralph Fiennes, Albert Finney and (most exciting of all) Ben Whishaw (hopefully as Q). Ben Whishaw in a Bond film? Now all we need is Romola Garai as Moneypenny.


As well as all that stuff, we finally found out the plot for Bond 23. Here it is:


Bond's loyalty to M is tested as her past comes back to haunt her. As MI6 comes under attack. 007 must track down and destroy the threat, no matter how personal the cost.


A shady back story for the security chief? Personal costs and old enemies? The Skyfall synopsis sounds a lot like Spooks to me. And that's no bad thing. Now someone get Harry Pearce involved, dammit.

As the excitment dies down - and people start spreading rumours that Moneypenny's first name might be Eve after all, or that Ralph Fiennes is returning as Blofeld after Craig's comment that Skyfall is "Bond with a capital B" - it's time to continue counting down to the film's release next October the only way we know how... by watching one Bond film a month. Here's our latest BlogalongaBond entry: How to Be a Bond Henchman.