After the excitement of yesterday's Drive Scalextric present, sometimes all you want to do is sit down for a rest and gaze lovingly at your Christmas tree.


But wait, what's that? George Osborne stole your Christmas tree and melted it down to feed his swans? Don't cancel December just yet: we've got a free, virtual Christmas tree for you to decorate right here.

JavaScript is disabled!
To display this content, you need a JavaScript capable browser.
Adobe Flash Player not installed or older than 8.0.39!

For more exciting Flash stuff, keep opening the i-Flicks Advent Calendar. Or try our Scream: Video Game. Or go see The Shiznit's Moonraker Bond game - it has Roger Moore's face in it.


Add your comment
All I Want for Christmas Is... Drive Scalextric
Written by Ivan Radford

Get your scorpion jackets on, boys.* This limited edition Drive Scalextric set has all the thrills and car chase excitement from Nicolas Winding Refn's action-packed blockbuster. For those looking for quieter, existential drama, simply unplug the remotes and watch as Ryan Gosling's patented painted in-car expression conveys a range of emotions without actually moving. Yes, the Drive Scalextric slot car racing box set has something for everyone. Providing they like driving. Or Ryan Gosling.*


And, if you order the Drive Scalextric for Christmas in the next two weeks, as well as the authentic Ryan Gosling driving gloves, you even get a free limited edition hammer to batter people's brains in. 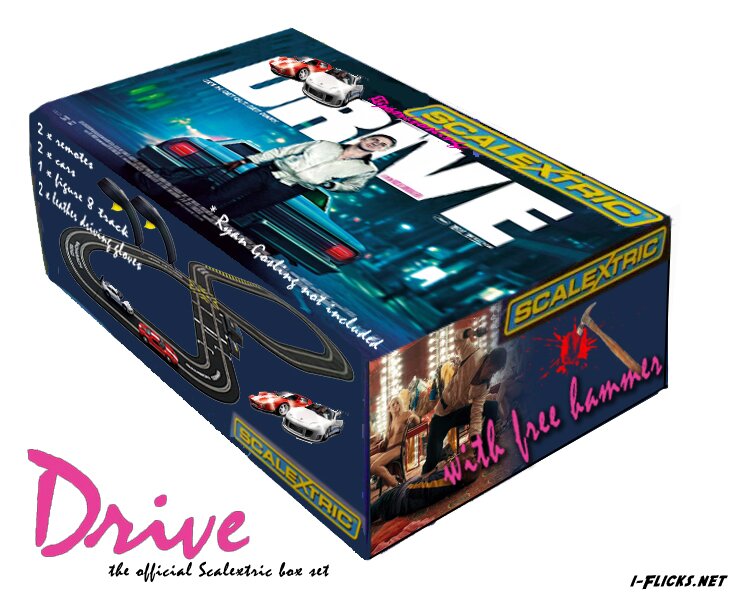 If you haven’t heard of Jan Švankmajer before, then your brain is in for an interesting experience. The Czech stop-motion legend seemingly won’t rest until he’s brought pretty much every inanimate object to life, from staplers and books to egg whisks and apples. For his 2010 feature Surviving Life, he’s done it with humans.

It reminds me a lot of Attack of the Clones, but this full trailer for John Carter is still jolly exciting. Who knew that Taylor Kitsch (aka Gambit from X-Men Origins: Wolverine and That Kid from Snakes on a Plane) could go all Conan and run around an alien civil war without it all looking like a load of ridiculous nubbins?

Answer: Andrew Stanton. Who probably watched Attack of the Clones several times to avoid falling into the same traps that George Lucas did. John Carter is out in March next year. For more on the film, check out the new John Carter stills released this week.


Add your comment
Review: We Have a Pope
Written by Ivan Radford

Thanks to mass media coverage (and Angels & Demons) we all know how a new Pope is elected. (Hint: Ewan McGregor doesn't turn up and jump out of a helicopter.) First, the conclave begins, cutting cardinals off from the world while they vote for a successor. Then, the burning of the ballot papers to mark the successful ordaining of his new Holiness. Then, everyone plays volleyball. In slow-motion.

Add your comment
BFI Screen Archive Lets You Search Film History for Bananas
Written by Ivan Radford
You may have heard about BFI's Screen Archive UK over the last couple of months. Basically, it's a massive collaboration between the BFI and regional film archives across the country to give you (yes, YOU) the ability to hunt through the UK's catalogue of old film.

As digital takes over from 35mm (ZOMG, I was talking about that yesterday) and film fades into the past, this online catalogue is a huge step towards preserving the UK's celluloid history - and a perfect demonstration of how modern technology can celebrate the legacy of analogue film.


You can uncover old footage, discover new videos, and find out about your film heritage. You can also use it search for bananas.


Did you know that you in 1976, someone called J.O. Barron made a 16mm colour movie for the Tropical Product Institute titled How to Market Better Bananas? Well, you do now. Isn't learning fun?


Solely in terms of banana education, Screen Archive UK is amazing. It's timely, fascinating, and exactly the kind of thing the BFI should be doing.


For a taste of what can be done with the stupidly large archive, read on for some videos made from the footage. One's called Holiday, one's called Customs and the other is titled Dance. Sadly none of them involve bananas.

I woke up this morning and realised something terrible: IT'S THE END OF THE WORLD ON FRIDAY.


If by end of the world, you mean the end of the Harry Potter film franchise. And if by Friday, you mean Friday.


Yes, the sensationally brilliant Harry Potter and the Deathly Hallows Part 2 (review here) is out on DVD in the next 48 hours and (here's the sad part) I'll never have the chance to write about a new Harry Potter film ever again. That means no more of this...

... or any of the other Harry Potter songs I made a few months back.


Good news, some might say, but this is a terribly emotional time for me. I even started to do a little cry when I received an email containing a new clip titled "Harry's Return to Hogwarts".


Oh well, at least I can comfort myself with a shiny copy of Daniel Radcliffe on Blu-ray/Triple Play/DVD/Digital Download this weekend. Until then, read on to see Harry return to Hogwarts - FOR THE LAST TIME.


I'm off to shed a few man tears in my bedroom.

(Tacita Dean's FILM - image via Poppet with a Camera)


I wrote a blog post for Guardian Film yesterday about the demise of 35mm as digital takes over the majority of the world's cinema screens. As always, a few things get cut out, either by me or by the astute editors, so I wanted to post a few further thoughts on here.


First off, I'm not anti-35mm. It's a beautiful medium and one that's served cinema well since The Lumière brothers. It degrades over time and is inconsistent in picture quality, but that mostly just adds to its flawed, poetic charm. Indeed, the very fact that it's being taken over by digital so rapidly adds a massive dollop of nostalgia to the analogue format.


A quick visit to Tate Modern to Tacita Dean's FILM will remind you of the brilliant possibilities open to 35mm, using just a pair of scissors or some paint to produce hand-crafted effects that still amaze.


The Best Film and Best Director both went (in a rare move) to The Artist and Michel Hazanavicius, while Brad Pitt and Meryl Streep both picked up lead acting gongs. But while some results were surprising (Albert Brooks, Best Supporting for Drive), some brilliant (Best Non-Fiction Film to the Oscar-snubbed Cave of Forgotten Dreams) and others predictable (Emmanuel Lubezki, Best Cinematography for The Tree of Life), the main thing to take away from the awards is that Jessica Chastain is a formidable Oscars contender. But not as formidable as Jessica Chastain. Or Jessica Chastain.


And so it's official: the campaign for all three Jessica Chastains to take over the world, King Ghidorah-style, is well underway.

Cower in terror at her triple-headed supporting prowess.

Just be glad she didn't win for The Debt and Coriolanus too. Then I'd have to think of a monster with five heads.

It's always good to get an email about David Fincher's The Girl with the Dragon Tattoo. Especially one with lots of pretty pictures. But what do you do with them? Gallery's get a bit boring sometimes, and I'm sure I've seen some of them before.


So I did the obvious thing - I went to Google. Straight away, I found a ton of new stills from Fincher Fanatic, Just Jared and various other places. Exciting, but not that helpful.


Then I started looking back at the last bunch of Dragon Tattoo stills on here, again featuring Daniel Craig and Rooney Mara, and remembered the amazing fact that Stieg Larsson's original novel mentions sandwiches on average once every 26 pages, and also talks about coffee on 92 separate occasions, because Mikael Blomkvist apparently likes coffee. A lot.


I'm not really sure if that explains what happened next in my head. But if you read on, you can see what I ended up doing. Hey, at least it reminds you how awesome David Fincher's version of Swedish Bum Rape: The Movie is looking. With or without the high caffeine content.


The Girl with the Dragon Tattoo is in cinemas on Boxing Day. Why not take the whole family? Or even better, just get your kids to watch David Fincher's Dragon Tattoo trailer for 30 seconds and scar them for life.

Some new John Carter stills have been doing the rounds this week, along with a new poster. And while a lot of people are rightly praising Andrew Stanton (Mr. WALL-E) for his jump from the animated director's post to the live action helm, CGI geniuses Pixar aren't the people doing the effects.


That would be a lovely London company called Double Negative.


I first heard of Double Negative back when Let Me In director Matt Reeves was doing the rounds for Cloverfield. I can't find my notes from then in my filing cabinet (read: drawer full of crap), but here's what Reeves said to Den of Geek:


"Double Negative are amazing. They did the Bourne movies, they did United 93 - in fact I saw the crash in United 93 and I said 'That crash is just burned into my memory, and when we have a similar sequence I want to pull on that for inspiration,' it was so convincing. They also did the latest Batman films..."


Being mightily impressed by Cloverfield, I moseyed on over to Double Negative's website. After Reeves' handheld monster madness, you might expect to see them on credits such as Green Zone, but they've also worked on everything from Harry Potter and the Deathly Hallows and Scott Pilgrim vs. the World to Inception and Attack the Block. Plus they were responsible for getting the boat to sink in The Boat that Rocked (the only good part of the film).


Go back to 1998 and they even worked on Pitch Black. Now that's an awesome start to a CV. In short, Double Negative? Yeah, they're the dogs bollocks. And they could probably even create a convincing pair for you if you wanted.

You know those long awkward car journeys you use to have as a kid in a foreigner’s car, crossing the border from Paraguay to Argentina? Las Acacias is one of those. At 90 minutes, it’s a slow-paced road trip, but one that soon finds it own charming gear.


Jacinta (Hebe Duarte) is heading to Buenos Aires to see her family. Reluctantly, Ruben (German De Silva) agrees to give her a lift as a favour to his boss – and then finds out that she has a baby too.